Chuck Royce (Trades, Portfolio) likes the transportation industry, and one of his three favorites is Landstar System Inc. (LSTR, Financial) according to comments he made on his website. Specifically, in a letter dated May 23, he wrote: “I am personally adding to areas with which we have had good experience. Transportation is one of them. We are adding to Forward Air (COUNCIL, Financial). Landstar, just an excellent company, and Air Lease (AL, Financial).”

It’s hard to argue with Royce on this pick. Landstar has one of the highest GuruFocus ratings for fundamentals, it has many competitive advantages that keep it profitable and it trades at a discount based on various metrics. The undervaluation is largely due to the market-wide selloff that began late last year.

Landstar is a transportation company that uses digital technologies to connect shipments with trucks and other means of moving cargo. Its networks connect approximately 1,200 independent commission sales agents with 102,000 third-party suppliers (primarily individual truck operators and carriers). The company provided this overview in the presentation accompanying its second quarter 2022 results:

Based in Jacksonville, Florida, Landstar operates primarily in the US with smaller operations in Canada, Mexico and other countries. It has a market cap of $5.39 billion as of this writing.

The company notes in its 2021 10-K that it operates in a highly competitive and fragmented industry. Its main competitors are “truckload carriers, third-party logistics companies, digital freight brokers, intermodal transportation and logistics service providers, railroads, less-than-truckload carriers and other asset-light transportation and logistics service providers.”

It believes it has several competitive advantages over many other transport and logistics companies:

Still, as we’ll see based on the GuruFocus profitability section for the stock, its margins are only average for the industry (for example, it has a 5.89% net margin versus 5.15% for the transportation industry median).

The company gets a rating of 8 out of 10 from GuruFocus for financial strength. 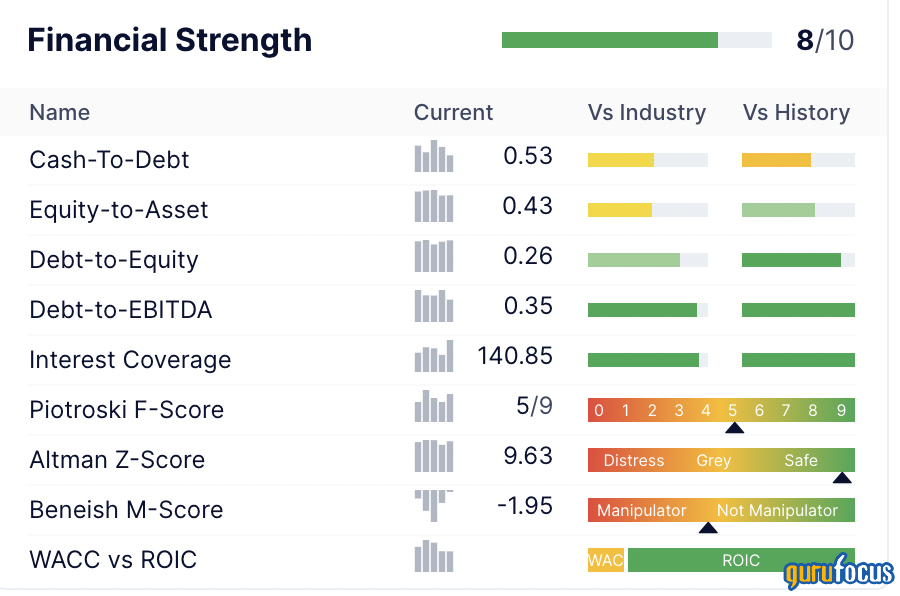 As the table shows, Landstar has only a modest amount of debt; it has about $140 of operating income for every $1 of interest expense. Not surprisingly, it has a very high Altman Z-score, which implies an extremely low probability of bankruptcy.

Similarly, it has a reasonable Piotroski F-score, but most impressive is its return on invested capital (ROIC) to weighted average cost of capital (WACC) ratio. Its WACC is just 7.06% while its ROIC is more than five times higher at 40.16%. In other words, it creates significant value for shareholders.

One of the reasons for its financial strength is its “asset-light” business model. While most companies in the transportation industry need to spend a lot of capital (and often take on debt) to buy trucks, trailers, planes and other equipment, Landstar needs relatively less because it buys digital technologies and capacity.

GuruFocus gives the stock a profitability position of 9 out of 10. 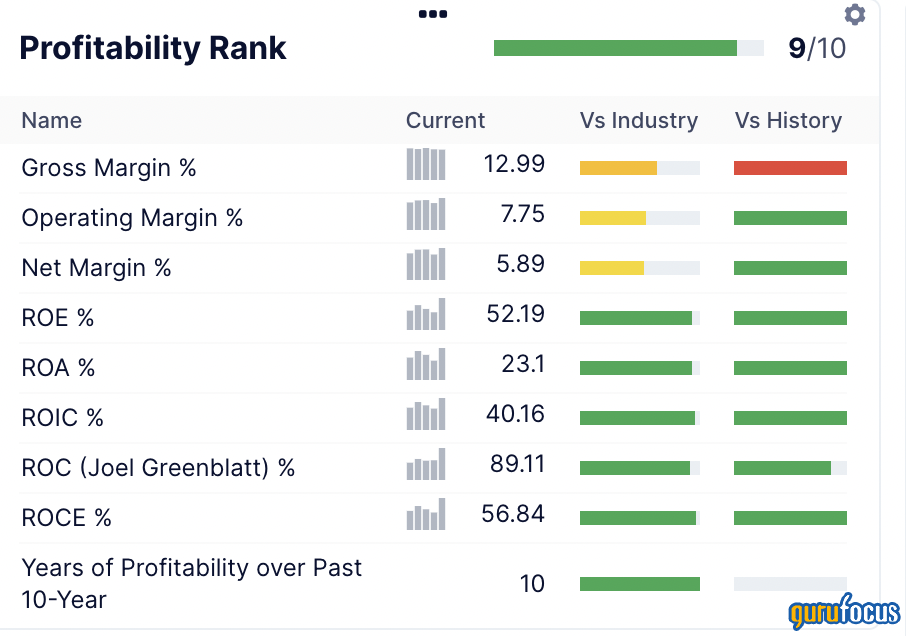 As mentioned above, Landstar’s margins are around the industry averages, but certainly its return on equity of 52.19% is much better than the average. Also note that the company has generated a profit every year for the past 10 years, which has helped boost its business predictability rating to 3.5 out of 5.0 stars. This is encouraging for a company in a cyclical industry.

Thanks to its industry-leading revenue growth, it gets a remarkable 10 out of 10 score for growth. In another good sign, its earnings per share growth rate excluding non-recurring items is higher than its revenue growth rate. 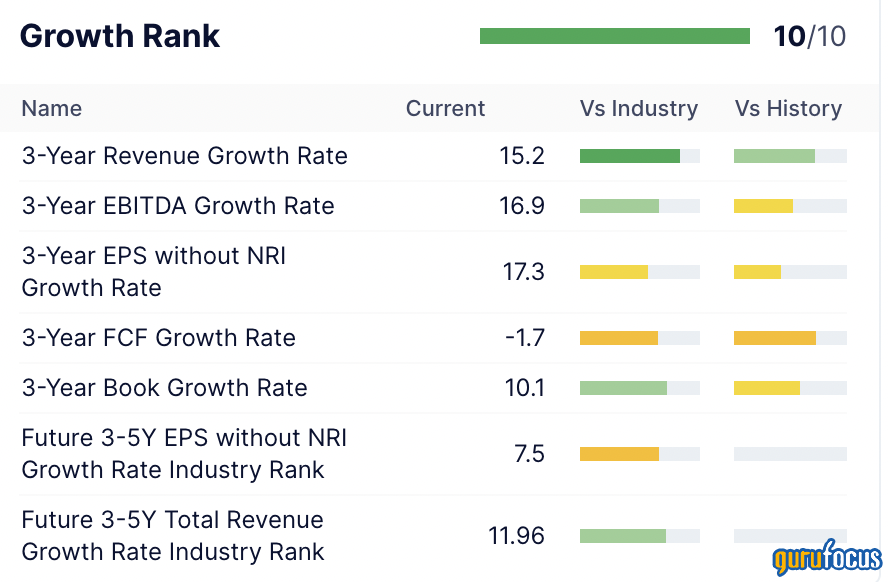 Take the yellow bar to the EPS without NRI line with a grain of salt. Although the yellow bar indicates the average performance among peers, Landstar’s EPS without NRI growth rate has averaged 17.3% per year over the past three years, while the industry median is 10.3%. This is actually a big difference, especially when we consider the effects of compounding.

Over the past decade, the company’s free cash flow has grown by an average of 8.73% per year: 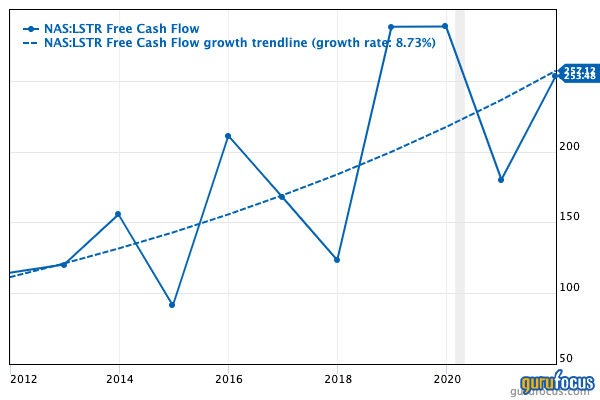 The company’s charging and revenue trends were positive. The recent investor presentation provided two examples for van equipment (trucks with enclosed boxes); the number of loads grew from less than 310,000 in 2019 to more than 370,000 in 2021. Over the same period, revenue per load grew from about $1,800 to about $2,600, an increase of 44.44% over three years.

No one will buy this stock for its dividend, which is just 0.70%, well below the industry average of 3.22%. However, if you add the share buybacks, which have averaged 2.10% per year over the past three years, the total return will come close to the industry average for dividends. 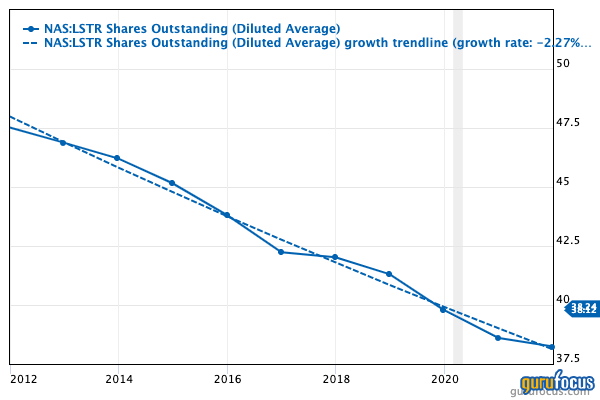 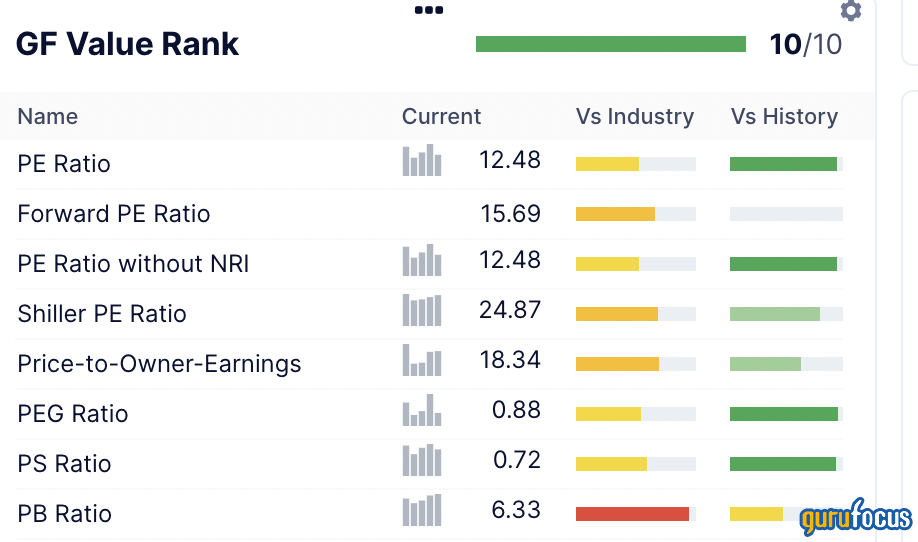 The GF value ranking should not be confused with the GF value chart. The GF value chart is based on a combination of historical multiples, a GuruFocus adjustment factor for past returns and growth and future estimates of business performance. Based on this model, the GF Value chart estimates whether a stock is overvalued, undervalued, fairly valued, or undervalued. The GF Value ranking is based on the GF Value chart, but the ranking is assigned based on how well stocks with that GF Value rating have performed on average over history. You can read more about this topic here. 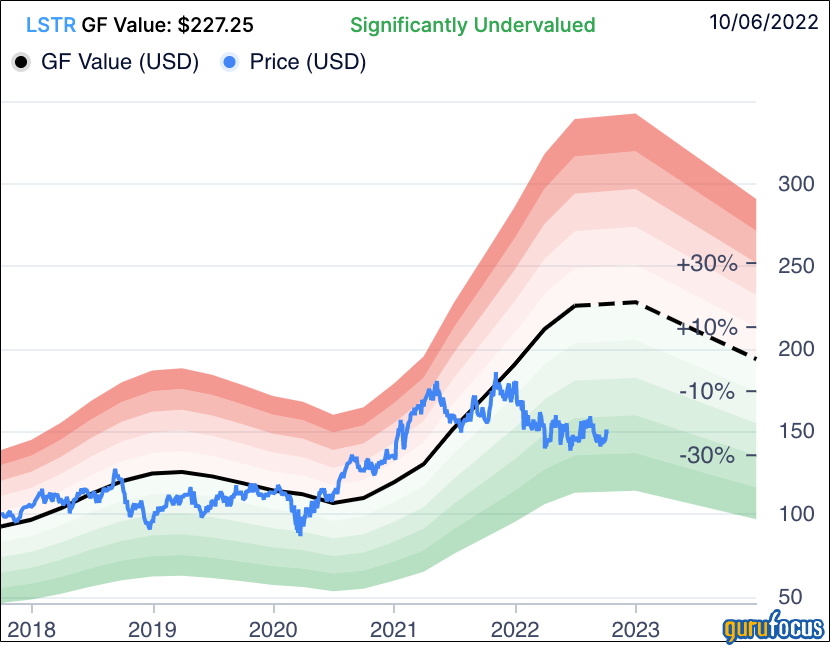 While the price-earnings ratio is close to the transportation industry average, the PEG ratio (which factors in Ebitda growth) indicates that the price is moderately undervalued.

The discounted cash flow (DCF) calculator also arrives at a significantly undervalued conclusion and a solid margin of safety using the following assumptions: 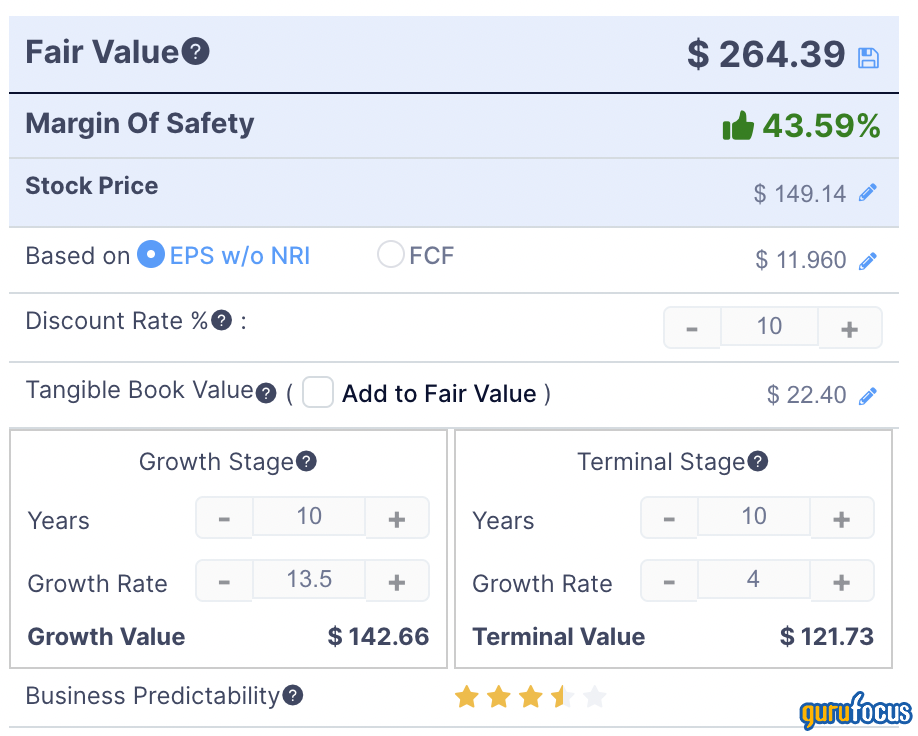 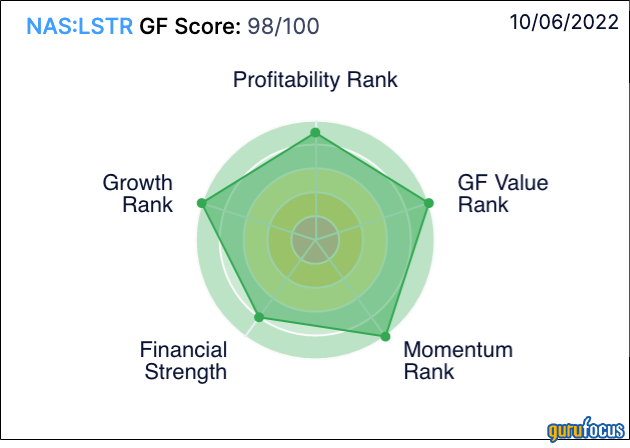 Six of the gurus tracked by GuruFocus held positions in Landstar at the end of the second quarter. These were the three biggest:

Institutional investors held the majority of shares outstanding at 77.92%, while insiders owned 1.97%. Among the insiders, CEO James Gattoni had the largest position with 94,792 shares.

I find it hard to make a case against Landstar. As we have seen, it enjoys very robust fundamentals, is undervalued and offers a modest current yield to shareholders. It’s also growing, and its earnings growth has accelerated over the past five years.

It does carry some debt, but with an interest coverage ratio of over 140 and an excellent Altman Z-score, there’s no doubting its financial strength.

As a result, Landstar may be preparing the shortlists of value investors to overlook a modest amount of debt. Growth investors who expect its current growth to continue can also check it out. But for income investors, there are better deals elsewhere.

What are soulbound tokens (SBTs) and how do...

Singapore is open to innovation in digital assets,...